Car theft has risen by 50 per cent in five years, with criminals using high-tech gadgets to steal keyless vehicles.

TOBY WALNE enters the shady world of car crime to discover how easy it is to steal a vehicle in a matter of seconds, and what can be done to beat the crooks...

Six seconds. Just enough time to reach for the TV remote control and change channels. But also sufficient time – as I discovered last week – to break into a swanky new £65,000 Range Rover and drive off into the distance (with the owner's consent for this experiment, I hasten to add). 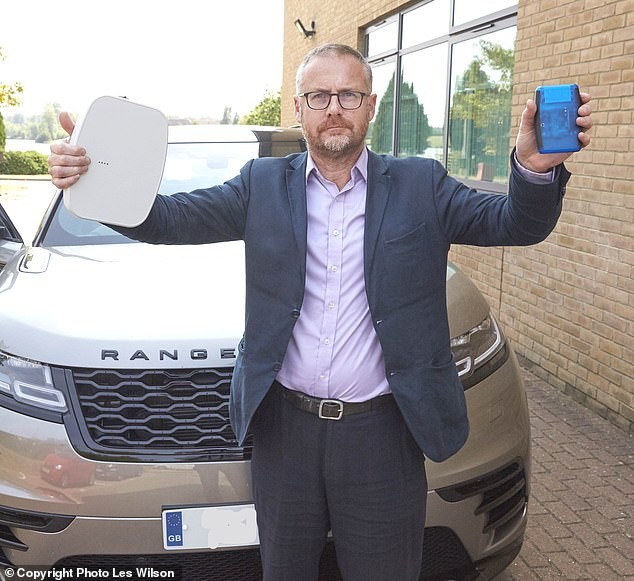 Child's play: Toby Walne with the cheap devices that allowed him to 'steal' the car

To become a car thief requires little training – just a willing accomplice in the shape of my 18-year-old son Harrison, on hand to show how car theft is now child's play. A few minutes earlier, we had been sitting around a table at the top secret Home Counties lair of a security expert who knows how the cunning minds of car criminals work – and who also owns the tools that organised underworld gangs use to steal cars on demand.

Like the fictional James Bond gadget man 'Q', he pulls out a couple of devices and places them carefully in front of me. One is an innocuous-looking blue box that is the size of a pack of cards – and comes with a tiny toggle. There are no secret agent's shooting darts or even a hidden laser gun – just three flashing lights when I turn it on.

Then there is an off-white device that looks a bit like an oblong dinner plate. It also has three lights and an on-off switch.

In hushed tones, I am told that such high-tech wizardry is worth as much as £20,000 in the wrong hands – though the expert admits similar illegal kits can be bought on the dark web for just £1,000.

My own subsequent homework uncovers that legal websites such as Amazon and eBay also sell such gear, for example a £295 testing device that can easily be adapted to help thieves steal cars. So what do the gadgets do?

'They are nothing more than a high-tech pair of tin cans with a piece of invisible string attaching them,' the anonymous security expert explains. 'The disc is placed by a home's front door or window in the hope that it picks up a signal that is being emitted from a car fob inside, maybe hanging on a hallway hook or sitting on a kitchen table. The disc has a reach of six metres and can pick up signals through walls.'

At this point, the blue box is placed on the driver's door and tricks the car into thinking it is the real keyless fob being operated – so it unlocks itself. Any car alarm system is automatically disarmed. Sitting inside the car, this same trickery fools the vehicle once again. It automatically 'presses' the starter button – the modern day equivalent of a key ignition fitted to new cars. Once the engine is started, the thief simply puts their foot down and drives off.

The security expert continues: 'When a thief subsequently arrives at their secret hideout with a car without a fob, it is not a problem. They can buy a separate key-programming device from as little as £100 which is legally available to purchase online. This enables them to format a blank key so it can then open the car and start the engine.'

Such key-programmers look oddly like a 1990s Nintendo Game Boy. They plug into the computer system port of a car that is often tucked away under the dashboard.

Putting theory into practice proved a breeze. My decade-old £15,000 Lotus Elise proved – like most cars – to be hopeless at stopping this high-tech crime.

Harrison standing by a window ledge with the disc – picking up the signal from my keys two metres inside the home. The blue box then ensured the motor started like magic. Within moments, my foot was on the accelerator and I was away.

The most recent Home Office figures reveal that vehicle theft has rocketed by 50 per cent over five years, with experts saying many cars are being stolen in this way. The Government claims that 56,000 vehicles are stolen in the UK each year, though experts say the true figure could be more like 100,000.

The cost to the insurance industry of car thefts has doubled in five years to reach £413million last year. Top of the range BMW, Mercedes and Range Rover models are among the most popular targets – stolen to order and shipped abroad or sent to 'chop shops' to be broken up into parts that are sold to traders or on auction websites.

With less than 1 per cent of thefts resulting in a conviction, it appears that the crooks are getting away with this crime.

To prove the ease with which even the latest top cars could be broken into, Harrison and I tried our luck with a new £65,000 Range Rover. Surely it would be armed to the teeth with gear to thwart thieves – and have no trouble keeping two bungling novices locked out?

Once again, Harrison stood by the window and this time I put the blue box at the base of the car door, behind which the key reader is embedded. Instantly the door release button clicked open.

I stepped into the vehicle and the blue box started the car as I put my foot on the brake pedal – a feature designed to power up the engine once the start button is pressed.

The getaway took six seconds. By the time an owner may have heard the car being started and looked out of their home window, I would have long since vanished in a puff of smoke.

THE ANSWER: JUST PUT YOUR KEYFOB IN A TIN

Modern cars firms are wasting millions of pounds developing keyless technology for vehicles that high-tech criminals (and novices like me) can crack within moments.

Yet an old metal tin with a lid is all you need to put a stop to the thieves as it blocks the signal from the fob that is picked up by a relay device.

Whether it is a metal container that once contained boiled sweets, or an old syrup or biscuit tin, the thieves will be thwarted – as long as the lid is on tightly or the tin is covered in metal foil. 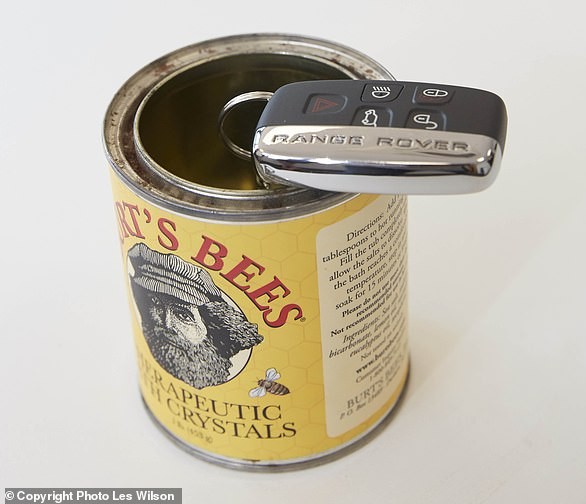 Can it: An old metal tin with a lid is all you need to put a stop to the thieves as it blocks the signal from the fob

You can also buy a £10 metal-lined fabric 'Faraday pouch' to prevent the signal being picked up by a car thief.

In both cases, the electro-magnetic waves emitted by the fob are blocked by the metal casing or 'Faraday shield', named after the English scientist who invented it in 1836. Criminals are also put off by simple steering wheel locks – such as the £45 Stoplock. The extra hassle of having to cut through them or pick the traditional key lock will deter many thieves.

Malcolm Tarling of the Association of British Insurers says: 'Car security has come on in leaps and bounds but struggles to keep pace with the ingenuity of car criminals.

'No vehicle is totally theft-proof but simple inexpensive steps to block fob signals or a lock on a steering wheel can deter most thieves.'

If you own an expensive vehicle, you can pay for the installation of a tracking service. So, if your car is stolen, its movements are then tracked using global positioning system (GPS) satellite technology.

Such equipment does not come cheap – and it is important to choose tracking devices that meet tough security standards and have insurance accreditation from industry body Thatcham Research.

Among those trackers worth considering is CanTrack Global. Its tracker is one of the most secure – and hard for criminals to disable.

Such equipment can cost around £250 to install and you may need to pay an annual 'monitoring' charge of £180.