IS IT REALLY COS-WORTH SO MUCH? RARE 33-YEAR- OLD FORD SIERRA RS500

Fast Fords have become big business in the classic car market, and this 33-year-old example could be sold for a whopping amount of money when it goes under the hammer later this year.

Values of the Sierra RS500 Cosworth have sky rocketed in recent years, with adoring - and ageing - boy racers looking to get their hands on the extremely limited edition cars, of which just 500 (as the name suggests) were produced in 1987 by Aston Martin Tickford.

One of these motors is being offered to the highest bidder in a UK classic car sale in November. Described as the 'best one left', it is estimated to sell for £85,000 - a price that will rise to almost £100,000 when you include the 12.5 per cent buyer' auction fees. But there are question marks about the valuation of the '80s icon... 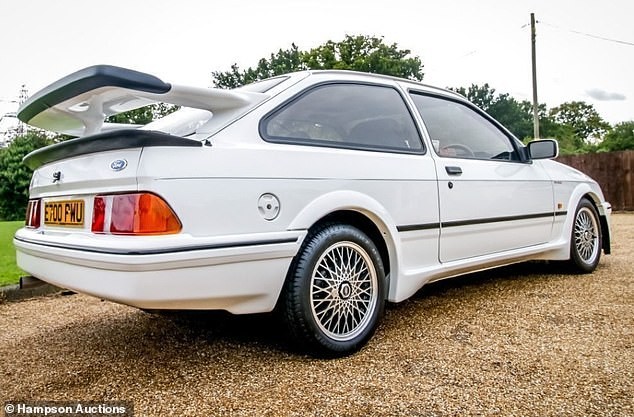 Is it really Cos-worth so much? This 1987 Ford Sierra RS500 Cosworth is being sold at auction in November with an estimated value of £85,000

The vehicle is part of Hampson Auctions' next classic car sale, taking place on 18 November at Thornton Manor in the Wirral, Cheshire.

It is one of just 56 road versions of the RS500 Cosworth finished in the Fast Ford fanatics' favourite colour of 'Essex' white (52 were Moonstone Blue and the rest black). 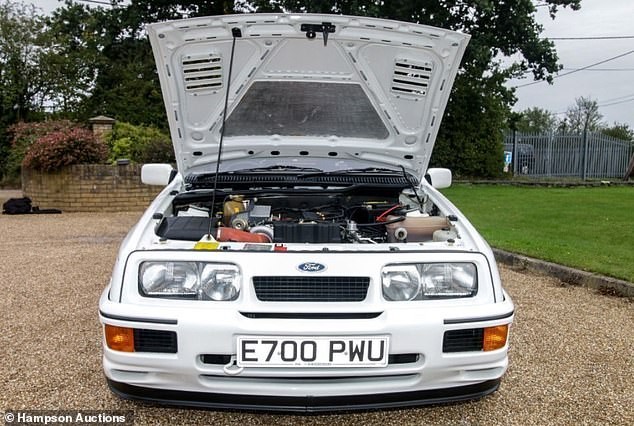 You'll need a fat wallet if you want this Fast Ford: Inclusive of buyer's fees, the winning bidder could pay close to £100,000 for the 1980's boy-racer's favourite 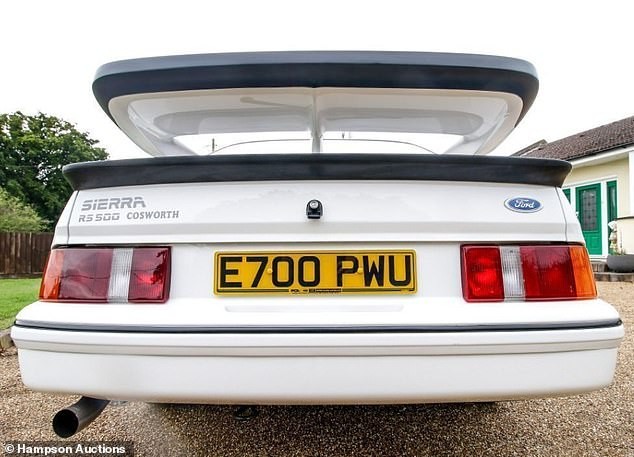 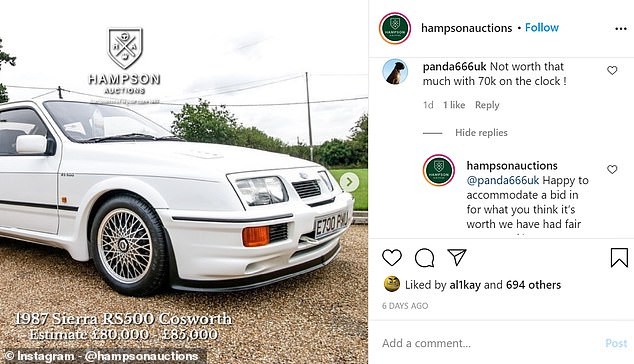 However, there is some debate about how realistic that figure is.

One petrolhead commented on an Instagram post about the car, saying: 'Not worth that much with 70k on the clock!'

Describing the soon-to-be-sold Cossie as 'the best one left', Hampson Auctions responded: 'Happy to accommodate a bid in for what you think it’s worth we have had fair amount of interest already at the estimate.'

Bidding for the car is due to start at £65,000, which does seem steep in comparison to other Sierra Cosworth RS500s sold in recent years with fewer miles on the clock or more unique appeal.

Another example - chassis 451 with just 12,000 miles on the clock - came within a whisker of that at a Silverstone Auctions sale the following May.

Arguably the most desirable of all, chassis number 1, was also offered to the highest bidder in 2018, but failed to meet the reserve. Had it sold, it was tipped to achieve £120,000 - a new record high.

Chassis number 418 sold most recently, with Silverstone Auctions closing bidding for the car with a fully verifiable 69,000 miles on the clock at £78,750. 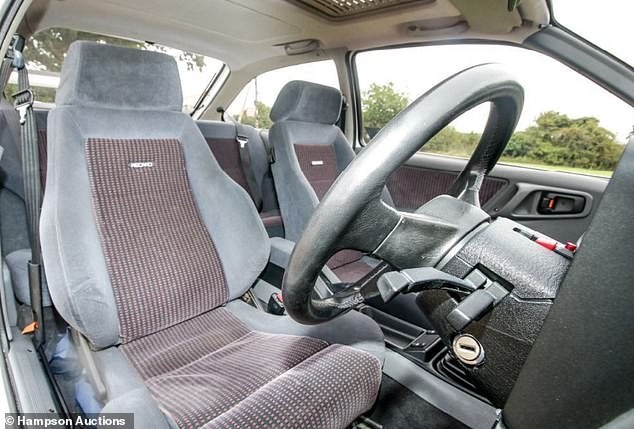 The record fee paid for one of these limited-edition 1980s Fords is £114,750 (excluding auction fees) in July 2017. That car had a paltry 10,733 miles on the clock. The interior of the car offered by Hampson Auctions looks extremely clean 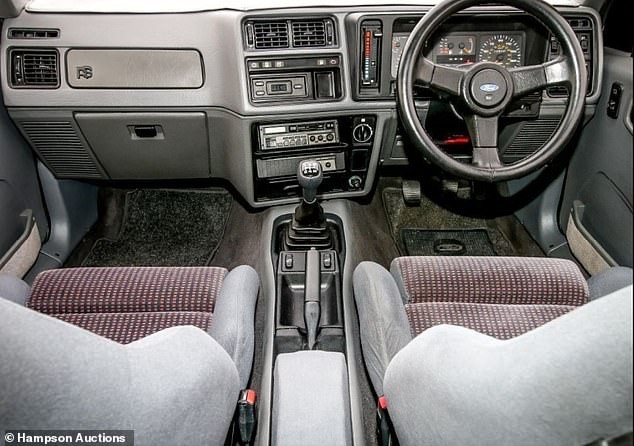 The interior looks totally unmolested and in very good condition

The RS500 uses a specially-built 2.0-litre turbocharged Cosworth engine producing 224bhp - a powerful motor for a three-door family car during the era 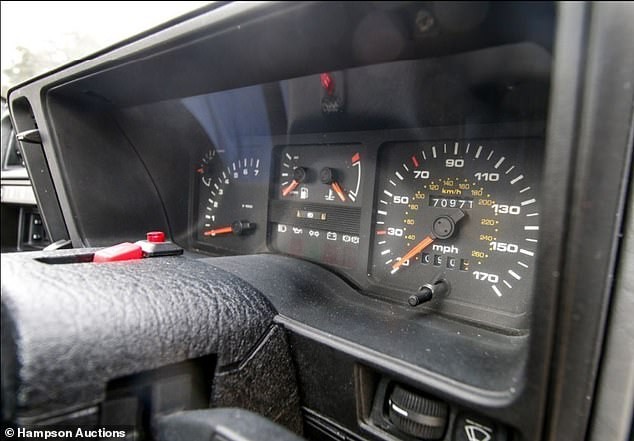 The Ford Sierra Cosworth RS500 has a total of 70,359 miles on the clock. The vendor says it has been part of a stationary exhibit in a private collection for five or so years

Very few Cosworth RS500s remain on the road today, with plenty destroyed being raced on tracks, crashed by enthusiastic drivers in the late '80s and early 1990s or stolen by thieves and meeting a grizzly end.

Hampson Auction's description states that the current vendor has 'known the car personally for over twenty years and this is seriously a most special motor car'.

It will be offered with the original bill of sale and a full history file, along with every MOT certificate since 1987.

'These show that the car was a stationary exhibit in a private collection for five or so years and was only moved for servicing and MOT requirements,' the listing states.

It adds: 'The car has been with the vendor for four years and he has decided it is time to part with it only because he feels it deserves to be seen by a wider, appreciative audience and his work and personal circumstances do not allow for him to devote the time needed for that – he genuinely believes this car is BETTER than when it was supplied, such has been the loving care and attention lavished upon it and that it is, clearly a passion that has been shared by its very few owners.' 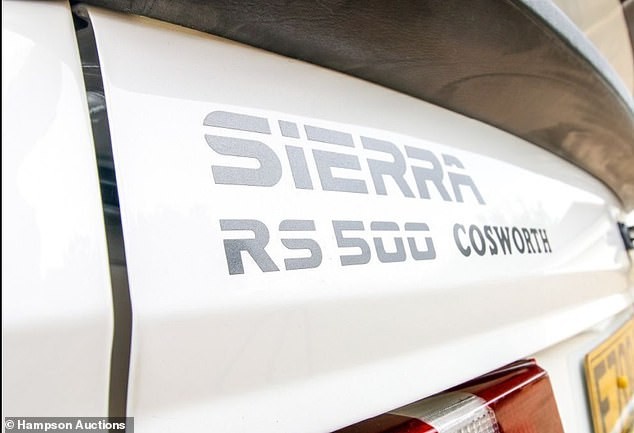 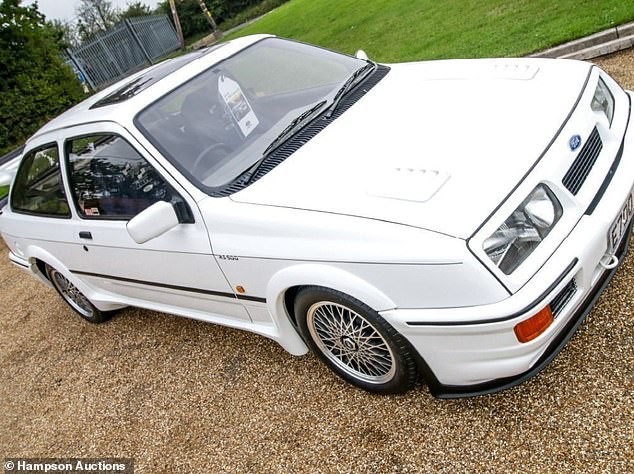 Very few Cosworth RS500s remain on the road today, with plenty being destroyed being raced on tracks, crashed by enthusiastic drivers in the late '80s and early 1990s or stolen by thieves and meeting a grizzly end? 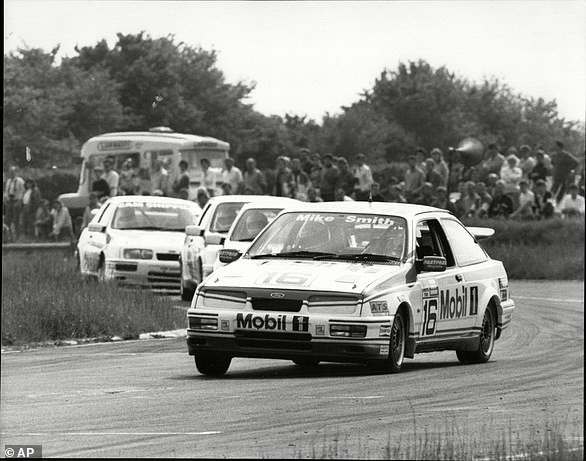 The Ford Sierra Cosworth RS500 uses a specially-built 2.0-litre turbocharged Cosworth engine producing 224bhp - which could be upped to 400bhp when modified for competition.

The car maker needed to produce at least 500 examples for road and race use in order to qualify to run in Touring Car series' and other championships that used road-going models.

These cars featured numerous aerodynamic enhancements that have since become a thing of legend among collectors.

That includes the 30mm lip spoiler applied to the tailgate to increase downforce, sweeping front splitter, and larger cooling ducts for both the brakes and the engine intercooler.

The cars were exclusively available through 90 nominated RS specialist dealers and went on sale in Britain on August 1st, 1987 at a price of £19,950. 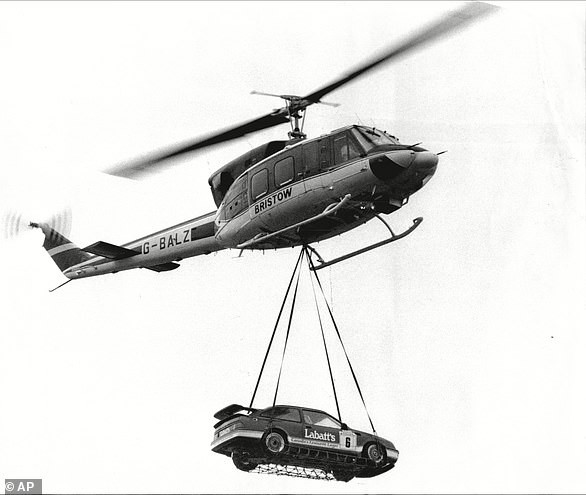 The Cosworth RS500 went on to become a popular model among race teams, dominating the paddocks of touring car championships