SIR JIM RATCLIFFE'S INEOS GRENADIER TO BE POWERED BY HYDROGEN

But the plan for a hydrogen fuel-cell driven electric off-roader – a back to basics rival to Land Rover’s new
Defender and Mercedes-Benz G-Wagon – goes much further and also includes moves for his refineries to
produce and supply the lighter than air (though highly flammable) gas fuel to a network of hydrogen filling
stations.

His step-on-the-gas strategy – using hydrogen in a chemical reaction to produce electric power and only
pure water emissions - aims to leap-frog the current battery-technology at the heart of most new electric
cars on the market.

It would also be a particularly smart move by Sir Jim - Britain’s fifth-richest man with an estimated personal
fortune of £12.2billion - whose refinery network already produces 300,000 tons of hydrogen a year, mainly
as a by-product from its chemical manufacturing operations. 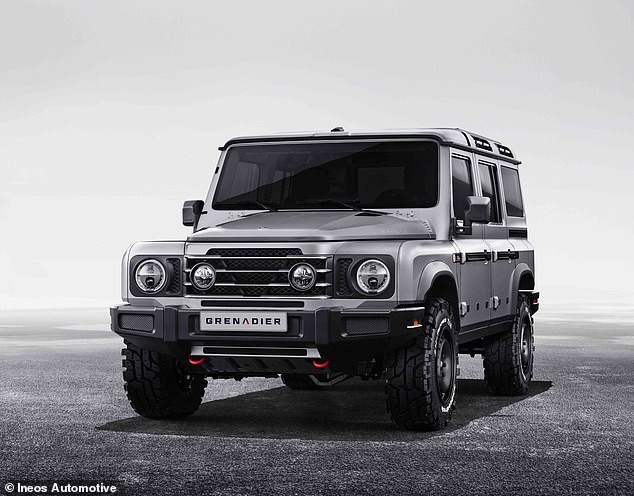 Green machine: From launch, the Grenadier will be powered by 3.0-litre BMW petrol and diesel
engines, though there could be an electric hydrogen-powered version to follow after Ineos signed a
new agreement with Hyundai to develop the vehicle technology

In future that hydrogen, and more, could fuel his and other firms’ fuel-cell vehicles, including those of new
partner Hyundai.

News of the new alliance was announced on Monday as Ineos Automotive and Hyundai signed a
memorandum of understanding – an initial business agreement - ‘to explore together new opportunities in
the hydrogen economy’.

These ‘opportunities’ include production and supply of hydrogen to filling stations - as well as new
hydrogen applications, technologies and business models.

Significantly it notes: ‘The two companies will also work together to explore the use of the Hyundai fuel cell
system in the Ineos Grenadier vehicle.’

The announcement comes just days after Prime Minister Boris Johnson announced a ban on new pure
petrol and diesel cars by 2030 – just over nine years away.

Some hybrids with ‘significant’ - though as yet unspecified - electric-only range will have a stay of
execution until 2035.

But while most car firms have pinned their hopes on using re-chargeable batteries to plug the gap left by
the banning of the internal combustion engine, Inoes and Hyundai are leap-frogging that technology to
gamble on hydrogen-powered fuel cells to produce the electricity. 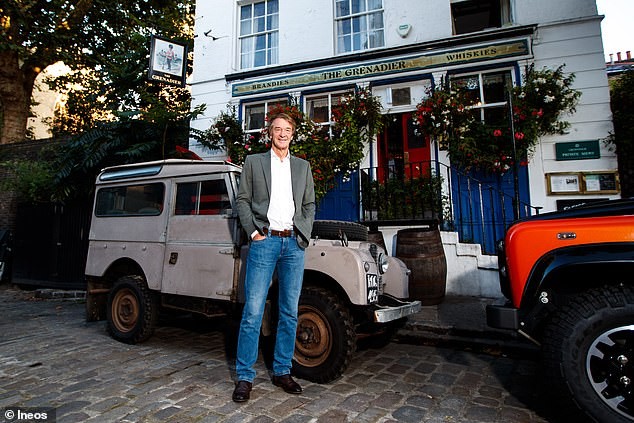 Using hydrogen to power his Grenadier would be a particularly smart move by Sir Jim whose
refinery network already produces 300,000 tons of hydrogen a year, mainly as a by-product from its
chemical manufacturing operations 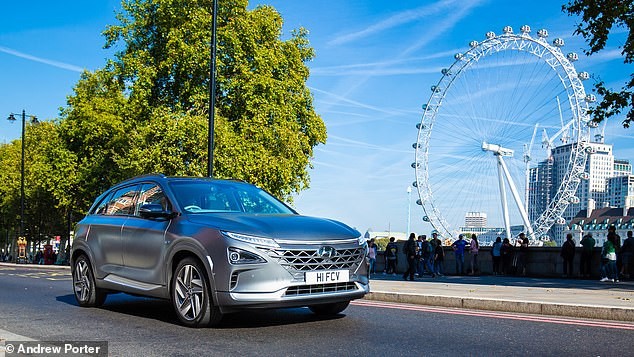 Hyundai is already a big supporter of hydrogen cars and its new Nexo fuel cell car costing from
£65,995 has a range of 414 miles – far more than most electric cars 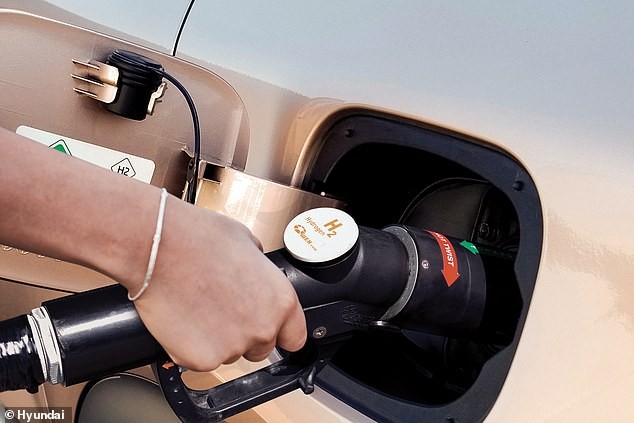 Mark Tennant, Ineos Automotive commercial director, over a year ago told us in an exclusive interview: 'We
do think that, longer term, the automotive business will simply be battery-electric vehicles. That might be
right for smaller, lighter, cars but won't be suitable for this class of vehicle.'

'We see hydrogen as a really viable technology, especially for large SUVs.

'We already supply a lot of commercial fleets today, such as buses. For us, that looks like a much better
technology option that pure electric.'

The Grenadier is set to be built at a revamped Mercedes-Benz Smart factory in France, rather than in
Wales as had been originally hoped. 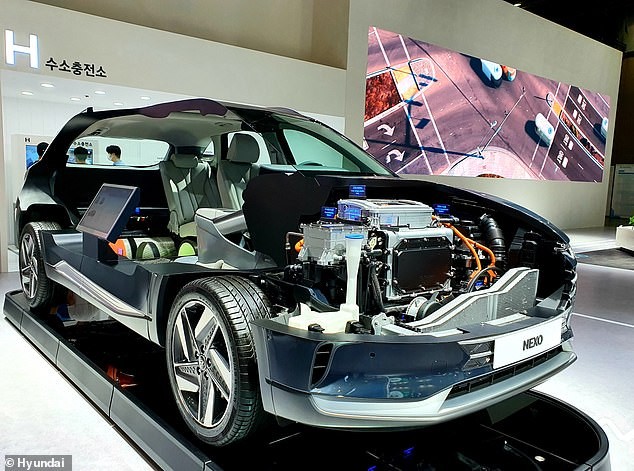 It is likely that, with the 2030 ban killing off the market for petrol and diesel fuel, Sir Jim Ratcliffe is
eyeing the market for his refineries to increasingly switch to hydrogen production, which Hyundai
already has developed plenty of expertise 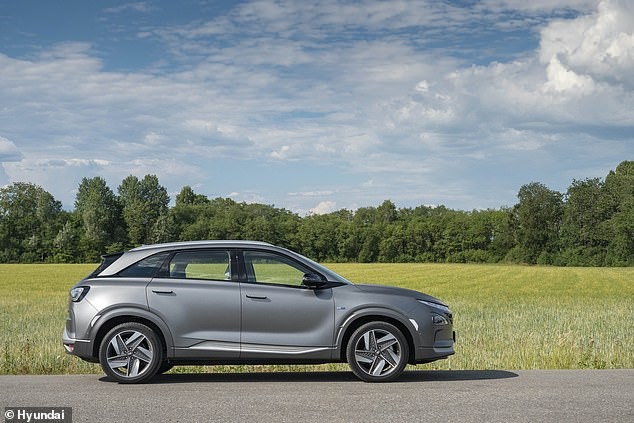 The Hyundai Nexo (pictured) is among just a handful of hydrogen fuel cell cars currently on the
market. This also includes the Honda Clarity and Toyota’s Mirai 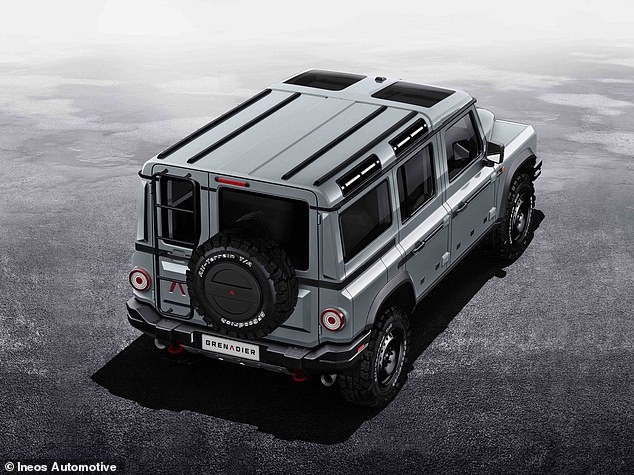 The Grenadier 4X4, which is seen as the replacement for the historic Land Rover Defender of old,
will go into production from the end of next year, likely at a factory in France - though this remains
unconfirmed ???????

The Grenadier was conceived by Ratcliffe, in a pub of the same name in London’s Belgravia, to fill a
perceived ‘gap in the market’  that has been abandoned, he says, by Land Rover and its new Defender
SUV.

The billionaire says there's a free-run at the market for a traditional, rugged stripped back, utilitarian, hard-
working 4X4 capable of going anywhere.

At launch the new Grenadier will be powered by conventional turbo-charged BMW 3.0-litre six-cylinder
petrol and diesel engines.

The two car makers said in a joint statement: ‘Hyundai and Ineos will jointly investigate opportunities for
the production and supply of hydrogen as well as the worldwide deployment of hydrogen applications and
technologies.

'Both companies will initially seek to facilitate public and private sector projects focused on the
development of a hydrogen value chain in Europe.’

This cooperation represents an important step in Ineos’ efforts to diversify its powertrain options at an early stage.’

Hyundai is a leader in hydrogen fuel-cell technology, most recently with its Nexo sports utility vehicle, and
started the world’s first mass production of fuel cell electric vehicles in 2013.

In 2018, it announced its medium to long term road map to increase annual production of hydrogen fuel
cell systems to 700,000 units by 2030.

Saehoon Kim, senior vice president and head of fuel cell centre at Hyundai Motor Company said its
expertise in hydrogen fuel cells combined with Ineos’ expertise in chemistry will help with the mass
production of green hydrogen and also fuel cells for the Grenadier.

‘Ineos’ move into the development of a fuel cell electric vehicle and hydrogen ecosystem marks yet
another milestone towards sustainable and clean transportation,’ the manufacturer added.

Peter Williams. technology director at Ineos, said: ‘This agreement puts us in a unique position to meet
emerging demand for affordable, low-carbon energy sources and the needs of demanding 4x4 owners in
the future.’

Ineos recently launched a new subsidiary business called Inovyn to develop and build clean hydrogen
capacity across Europe, making it the largest existing operator in Europe of electrolysis, the critical
technology producing hydrogen for power generation, transportation and industrial use.

The firm said: ‘Our experience in storage and handling of hydrogen combined with its established know-
how in electrolysis technology, puts Ineos in a unique position to drive progress towards a carbon-free
future based on hydrogen. 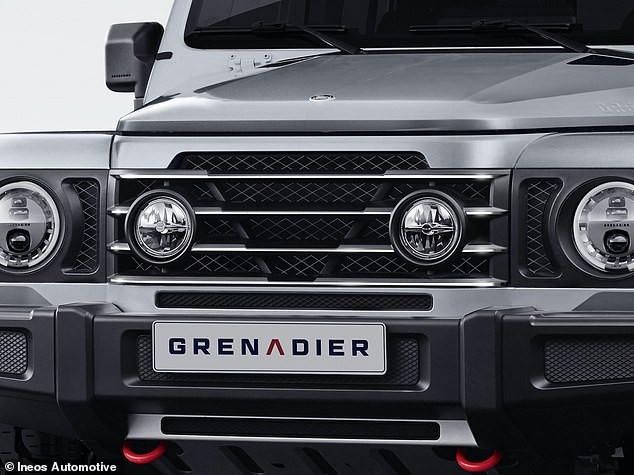 The Grenadier name comes from one of Sir Jim Ratcliffe's favourite pubs in trendy London, where
he came up with the original idea to launch a new vehicle to market 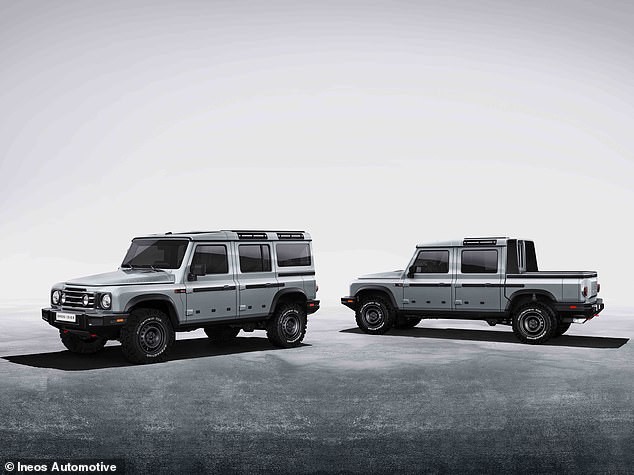 Grenadier will have 21st century levels of equipment land safety system and be available as a
conventional SUV and a truck with a flat-bed??????? 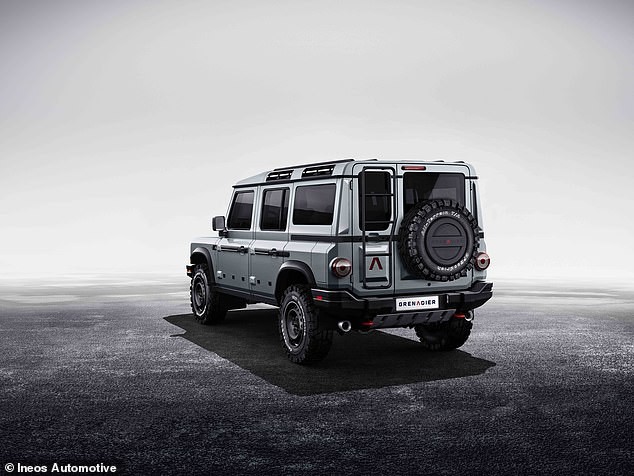 The new Grenadier had its first UK outing in early September when Ineos boss Sir Jim took it for a surprise
spin at the exclusive Concourse of Elegance automotive event at Hampton Court Palace near London.

There he revealed that the chunky 4X4 will ‘almost certainly’ be built in in France – at a a Mercedes-Benz
Smart factory in Hambach on the Franco-German border. It is a blow to hopes of Bridgend in Wales which
was originally earmarked.

Sir Jim said of the Grenadier: ‘It’s brilliant. It will end up 80 per cent Mercedes-Benz G-Wagon, but at half the price.

‘We’ve got 200 German engineers down near Stuttgart working on it’.

Instead of visiting showrooms, Grenadier customers will shop online and via a network of agricultural and
tractor traders, ‘pop-up sites’ at county shows and equestrian events, and at off-road experience centres.
For repairs and servicing it is planning a ‘flying spanner’ service as well as a partnership with a major
repair centre chain.

Sir Jim says a ‘gap’ in the mud-plugger market has been left by Land Rover ending on January 29 2016
the 2 million production run of its original Defender some 67 years after launch. It has been replaced with
the modern hi-tech 21st century Defender now on sale priced from around £38,000. Land Rover’s lawyers
failed in a legal bid to stop the new rival Grenadier in its mud-rutted tracks.

Meanwhile, Land Rover’s original classic Defender shape, harking back to 1948 has been reborn as a
£200,000 rally-derived performance off roader from its subsidiary Bowler Motors (part of its Special Vehicle
Operations division) and powered by a 575 horse-power 5.0 litre V8 engine.