SPEED CAMERAS ARE BEING USED TO FLEECE DRIVERS

Speed camera sites are being used to make money rather than prevent accidents, an official report revealed last night.

The police watchdog says some locations are chosen because they are 'good hunting grounds' for fines.

Motorists have long suspected they are cash cows – 2.3million speeding fines were handed out in 2018, potentially raking in around £230million.

Figures show the number of speeding fines handed out has grown by more than 40 per cent between 2011 and 2018 - rising to over 2.1million. Pictured: Average speed cameras keep an eye on traffic on the M6 in Cheshire 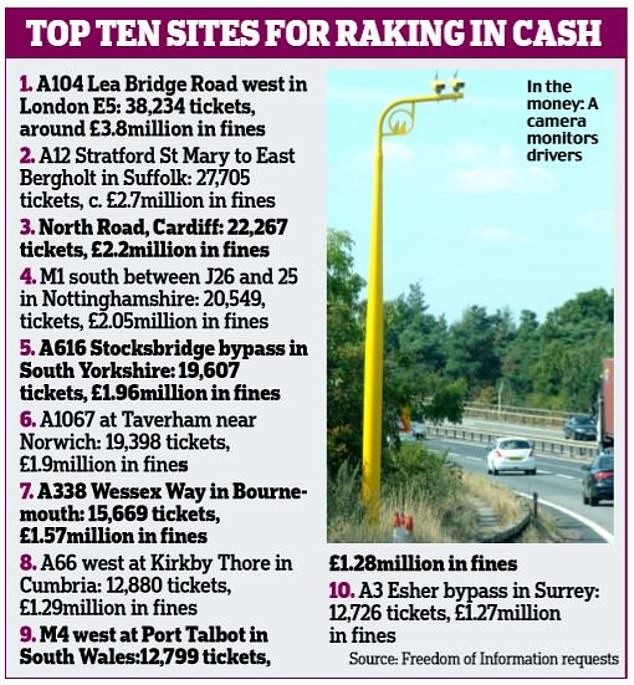 Campaigners said the findings were unacceptable because cameras should be about 'saving lives and nothing more'. The report by Her Majesty's Inspectorate of Constabulary and Fire & Rescue Services called for greater transparency over the use of cameras and their revenues.

It said: 'Apparent unwillingness to support education over enforcement had led to suspicion among officers, including some at chief officer level, that the focus of activity was intended to increase revenue for the safety partnership.

The report said some forces had set up community speedwatch schemes to change driver behaviour without prosecution.

These can involve volunteers being issued with radar guns and the details they gather can lead to a warning letter to the motorist or even a fine. Such initiatives have been blocked by safety camera partnerships, so they could carry on sending out speeding tickets, the report said.

'We found examples where the use of partnership enforcement activity appeared to be in direct conflict with the development of a speedwatch scheme,' it added.

'Forces and their partners need to make sure that there is transparency over how and where cameras are located. 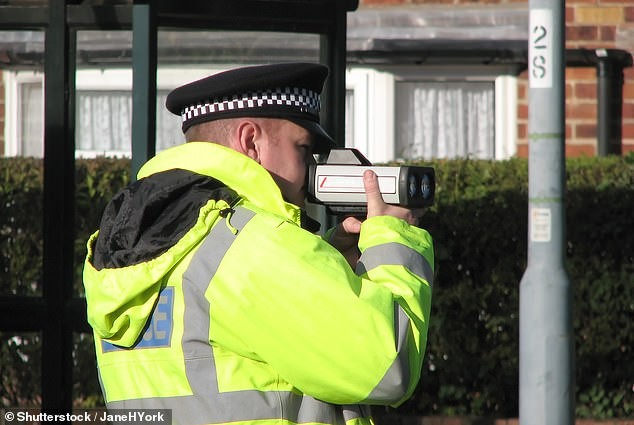 Inspectors found that there were suspicions that the cameras were being used to generate revenue. While police forces do not receive money from traffic fines, they are able to claim back administration costs. Pictured: An officer using a hand-held speed gun (library image)

'There are already government guidelines on this issue, but we believe that these should be refreshed to include a requirement for publication of what revenue is raised and how it is spent.'

The number of speeding tickets issued in England and Wales has soared from 1.6million in 2011 to 2.3million in 2018.

There are no centrally-held figures on the amount raised nationally by speed cameras but the punishment is a minimum £100 fine and three points on a licence.

Drivers however may be able to avoid the penalty and points by attending a speed awareness course, at a cost of between £80 and £100. These fees are intended to cover the cost of providing the course.

But the HMICFRS report said the rules were open to 'misinterpretation' and 'there is the potential in some cases for revenue to be generated'. The RAC's head of policy, Nicholas Lyes, said: 'Decisions on where to deploy speed cameras must always be led by a genuine desire to improve road safety.

'So any suggestion that a decision to locate cameras in certain places is driven by raising revenue, rather than improving road safety, is unacceptable. Cameras have played a vital role in keeping our roads safe over the years, but the police must be able to show their deployment is about saving lives and nothing more.'

The Mail's End the Mobile Madness campaign has highlighted the shocking scale of deaths caused by drivers distracted while using their phone. But the report shows fines for that offence plummeted by 76 per cent from 2011 to 2017, from around 162,400 tickets to around 38,600.

The number of breathalyser and roadside drug tests has also fallen.