A third of drivers will take to the road this weekend to celebrate the easing of the lockdown, according to the RAC.

More than 10million of us will be escaping our homes for an overnight stay on July 4, the motoring group's poll found.

The date has been dubbed 'Super Saturday' due to pubs and restaurants reopening. Officials are now braced for chaos on what is expected to be the busiest weekend on the roads this year, as many choose to avoid public transport for fear of infection. 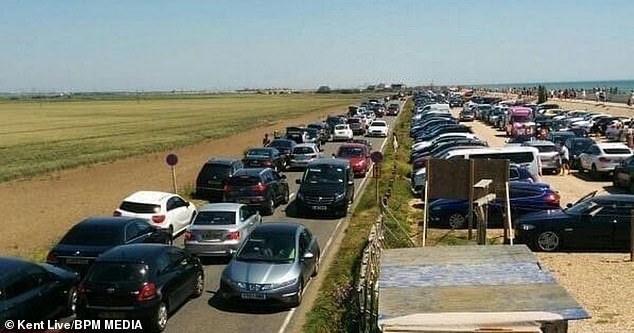 A third of drivers will take to the road this weekend to celebrate the easing of the lockdown, according to the RAC (pictured: a car park in Camber Sands on June 25)

It marks a stark contrast to two months ago, when the traffic on the roads plummeted to mid-1950s levels.

A fifth of motorists, equivalent to 6.5million, are planning overnight stays with friends or family, while around two million drivers will head off for 'staycation' breaks at campsites, the poll found.

Some 680,000 drivers plan to visit caravan sites, while one million will stay in hotels, B&Bs or other self-catering accommodation.

The predictions are based on a survey of 1,400 drivers. In recent days, the number of breakdowns has returned to levels normally expected for late June.

But, as many drivers have not used their cars for weeks or months, rescue and recovery firms are braced for a sharp rise in incidents this weekend.

The RAC's Rod Dennis said: 'These figures suggest that after 15 weeks of lockdown, a large proportion of drivers in England are desperate to reconnect with friends, family and indeed nature by staying overnight, be that in a house or on a camping or caravan site. 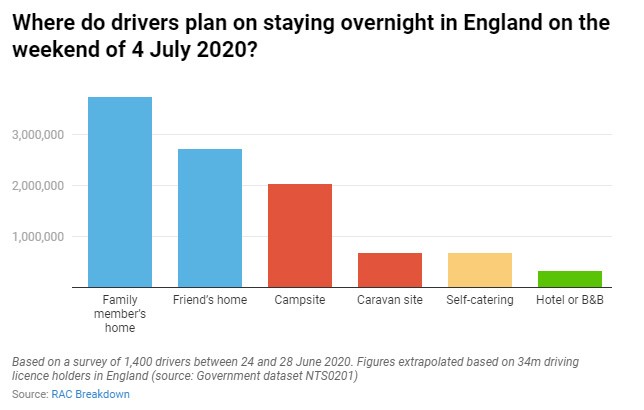 A narrow lane in St Ives, Cornwall, leading to the beachfront. Officials fear that cars blocking up the narrow, winding roads will make it hard for tourists to follow social distancing rules

People forget social distancing on a very busy Wandsworth common. July 4 has been dubbed 'Super Saturday' due to pubs and restaurants reopening

'This could lead to some busy conditions on the roads, with the location of queues likely to be dependent on just how far people travel. Motorways and major A-roads could end up taking the brunt of the traffic if people have longer distances to drive to see family and friends or to take a weekend break.'

The weekend traffic forecast is certainly worrying residents in the former fishing town of St Ives in Cornwall.